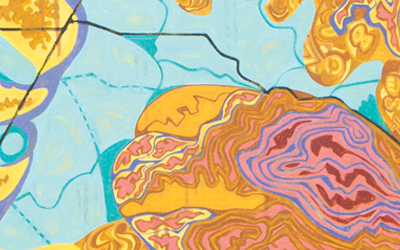 Dani and David both explore the idea of viewing the ground from above. Dani further abstracts the landscape using ceramics and enlarging the circular grid motif. The grids and circles appear to be different sizes depending on one’s distance from the ground. David explores landscape from above through topographic studies, contour models, aerial pattern studies, and small wall sculptures with an architectural eye.

David Disko holds a BFA from the University of Utah (UU). From 1981-1983, he mounted one-person shows at UU and Springville Museum and participated in group shows at the Salt Lake Art Center, Springville Museum, UU and Ogden Union Station Galleries. Coming to Albuquerque in 1986, he turned to building construction. In 2000, his company, Innerspace, renovated the KiMo Theater winning a National Preservation Award. In 2009 a professional change allowed him to resume art making. In 2013 he exhibited at Casa Cultura. In 2016 he participated in SURFACE: Emerging Artists of New Mexico at Harwood Art Center. 2016 group shows included: the NM State Fair, “Atypical Topographies” at Adams State University and 12×12 at Harwood. 2017 shows include: “Gateway to Imagination” at the Farmington Museum, “Prospectus #246 Portfolio”, NM Department of Cultural Affairs and 12×12 at Harwood. “I depict landforms in a way that an amalgam of a cartographer/architect might. I take apart the landscape, break it up and re-assemble it into objects that tell a story. The story can be personal; about an experience that I had at a particular place or its depiction, via account, maps or fly-overs. In the late 70’s I spent several seasons working as a BLM firefighter. Often, I would be transported to fire sites via helicopter and I was able to view the landscape from the air where the land revealed unseen contours and trees and rock became patterns of color and shadow. My art practice has followed my evolving understanding of the land. I’ve made renderings of dunes and domes and objects akin to contour models. Recently, I’ve assembled journal accounts, cartographic studies, paintings and sculpture that consider place as an accumulation of collected bits and pieces over time.” – David Disko

Dani Jeffries is an artist living in her adopted home town of Albuquerque, New Mexico. She is originally from Grand Rapids, Michigan, and attended the University of Michigan – School of Art, where she received a Bachelor of Fine Arts degree in 1987. After graduation, she moved to Los Angeles, Detroit, Phoenix, and finally, in 2001, to Albuquerque, where she found a welcoming community of other Albuquerque artists. Along the way, she has shown her artwork in galleries, art fairs, and competitions in Michigan, Florida, Washington D.C., Arizona, and New Mexico. “In my ceramic tile mosaics I incorporate the imagery of the geometric patterns which are created by the use of pivot irrigation systems used in large scale farming. When viewed from an airplane, the patterns created on the ground look like a series of squares containing concentric circles that are bisected by diagonal lines connecting opposite corners of the squares. I have chosen a color palette for each piece that is representative of a specific place, time of day or season that I found to be exceptionally beautiful and harmonious.” – Dani Jeffries
Exhibition Archive