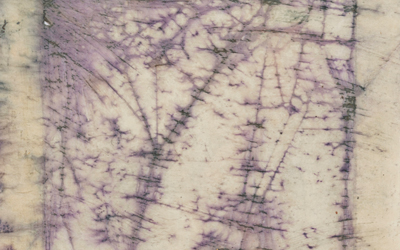 Danila Rumold’s current series dissolves things seemingly in opposition. Deconstructing conventional notions of painting in her work, Rumold crosses over from painting into large-scale collage and installation. Employing household tools, such as stove-top burners and washing machines in the materials’ preparation, she blurs the commonly separated roles of care-taking and art-making. Sleeping, cooking and eating on top of paper results in spontaneous mark-making, which Rumold explores as formal abstractions while referencing the body. Using semi-translucent Mulberry paper stained with earthy colors made from regional plant and food dyes, Danila brings the components together with readymade art materials. Inviting everyday experiences and chance to catalyze the work, Rumold integrates the unconscious and conscious; art and life.

Danila Rumold received her MFA in Painting from the University of Washington in 2001. For seven years, Rumold taught drawing, design, mural painting and printmaking at Seattle University, where in the summer of 2007 she was resident director and instructor for a drawing/painting program in Siena, Italy. In 2009, she received an artist grant to participate in the Vermont Studios residency program and in 2010 she was awarded an artist grant from the Ora Lerman Charitable Trust Foundation. Mrs. Rumold has worked with SFMOMA Artist Gallery in San Francisco and is currently represented by the Gallery I|M|A, in Seattle Washington, and 208 Exhibit in Albuquerque, New Mexico. Her work has been exhibited in California, Chicago, Seattle, New York and New Mexico. DanilaRumold.com

“Art acts most powerfully for me, when against all odds, it is beautiful. As a transplant to New Mexico I am drawn to the textures of the landscape. I employ foraged materials such as natural dyes extracted from local plants and foods, and clay and sand from the high desert grounds. I then mix them with other materials such as graphite, pastel, charcoal, and ink, bringing them together into various textural configurations and fleeting constellations.

I look toward a world in which, the construct of an “abstract” versus “corporeal” are dissolved. By initiating unfettered happenings to occur upon the surface, such as, sleeping, cooking and eating, I explore new forms of mark making, while referencing the body. Through my process, I invite everyday experiences and chance to catalyze the work. Back in the studio, I bring intention into the work, integrating the unconscious and conscious; and art and life.” – Danila Rumold