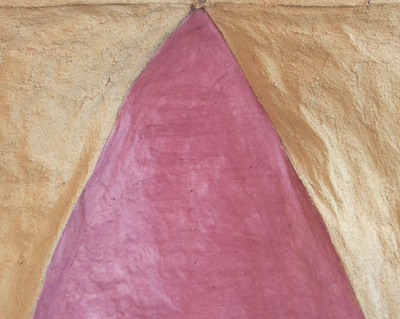 Plantcraft is an inquiry into the natural environment of the Southwest. The work encompasses plant and insect
dyes, hand harvested aliz (a traditional clay plaster) and botanical paintings of regional medicinal plants. Plantcraft
investigates place, the human being’s relationship with flora and natural materials, the southwestern landscape’s
interaction with architecture, as well as the mystique and the stories of plants that heal.

Joanna Keane Lopez was born and raised in Albuquerque, New Mexico. She graduated with a BFA in Studio Art
with a second major in Spanish from The University of New Mexico with the honors of summa cum laude. While at
UNM, she was a part of the art & ecology program, and Land Arts of The American West, where as a team the group
camped for 6 weeks throughout New Mexico, Utah, Arizona, and Texas. She was selected as a SURFACE: Emerging
Artist of New Mexico by Harwood Art Center in 2015. In August 2016, she traveled to Iquitos, Peru to study plant
knowledge and artistic expressions of mestizo shamanism in the Peruvian Amazon with an international research
grant from the Andrew W. Mellon Foundation. In March 2017 she did a work-trade residency with A-Z West in Joshua
Tree, CA. Beginning in June 2017, she will be working as a visual arts teaching assistant with the Oxbow School’s
Summer Art Camp in Napa, California.

Joanna Keane Lopez’s practice brings together paper, wildcrafted plants, natural dyes, adobe mud and embroidery
that are rooted in traditional artistic practices of the Southwest. Her work draws upon cultural and historical art
forms specific to New Mexico such as architectural forms, materials and methods. Inspirations include the work of
the enjarradora (traditional woman plasterer), the tejedora (woman weaver) who works with wool and dyes and the
curandera (medicine woman) who utilizes regional medicinal plants.