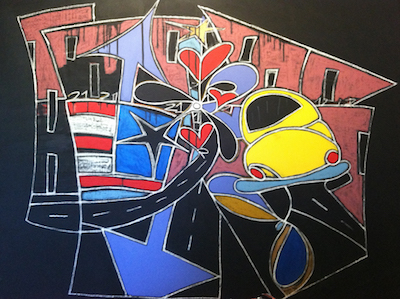 Christian Gallegos’ vibrant paintings in TAXI! reflect his personal experience growing up at the intersection of the
street life and art scene of New York City. The iconic yellow cab is a recurrent motif in these paintings along with the
urban landscape , especially the graffiti / street art that has become an important part the international art world.

Christian Gallegos grew up in New York City while spending summers in New Mexico. He moved to Albuquerque in
2004, to focus on his creative endeavors. In 2011 he was selected as an Emerging Artist by Creative Albuquerque
and has continued to exhibit prolifically in solo shows and juried exhibitions including Miniatures and More at The
Albuquerque Museum of Art & History.

Growing up trekking back and forth between the East Coast and the Southwest, Christian produces his work from
the viewpoint of 35,000 ft. Mastering the balance of these points of view; he creates a colorfully exuberant mix of
both urban and aerial visual imagery. His stylized motifs and refined palette have become a signature that is sustained
throughout his body of work.

“This cache of works are manifestations of memory whereby life is a process with experiences driving and
affecting memory. Living in a multidimensional reality, Christian Michael Gallegos transcribes an autobiographical
language of memory and experience delivering single plane views gathered from a lifetime.

The lack of depth is an allusion to a view from 20,000 feet high where dimensions and depth collapse. Entranced
by this experience, dimensions collapse and tableaus exist on one homogenized plane of view. Ostensibly
transposing images into this one-dimensional plane with color, impasto, layering, and line, Christian coaxes the
mind to perceive, if not read, the depth and dimensions of his work, while at the same time, sharing intimate
moments from his life.” – RosaLee Lopez, B.A.F.A / Art Historian, Curator

Christian Gallegos, We on a Bridge 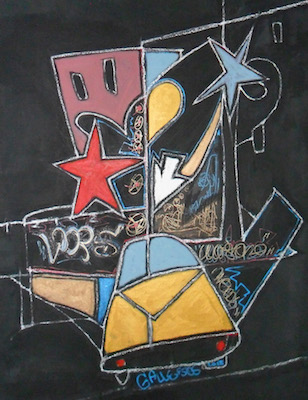