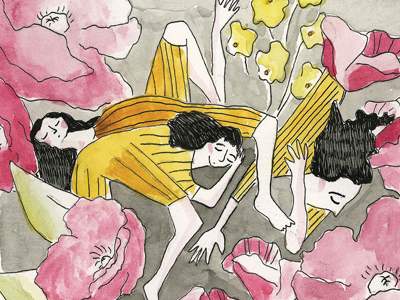 Zahra Marwan creates artwork based on stories and imagery found in her immediate environment. The works in “When Life Became Floral” reflect Marwan’s recent loss of her father and the devastation she felt afterwards. While all the foliage around her was beginning to bloom, she found herself asking the question, “How can I feel so much pain and life be so beautiful?” Her work illustrates her value of lightheartedness, her humor and her ability to find optimism in face of adversity.

Zahra grew up in two deserts which vary drastically and have many similarities in culture. One close to the sea, the other close to the mountains. She studied the visual arts in France, and continues various pursuits to further educate herself. She currently lives in the Barelas neighborhood of Albuquerque, New Mexico, and works in her studio at the Harwood Art Center, where she incorporates Kuwaiti tendencies into her daily life.

“I create my work based on stories and imagery from whichever environment I find myself in. I grew up valuing being lighthearted, full of humor, and finding optimism in face of adversity.

Last Spring, I lost my father. It is my first experience dealing with the death of someone I love so much. When I returned from his burial and funeral, I was devastated. The foliage in Albuquerque was beginning to bloom, and the city changing with the season. A question I kept asking myself was “how can I feel so much pain and life be so beautiful?” – Zahra Marwan