Meet the team of our 2021 Apprenticeship for Art & Social Justice! 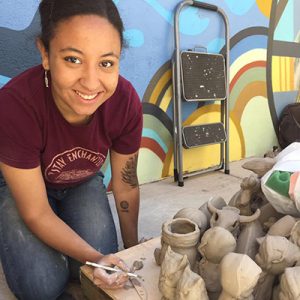 Helen Juliet Atkins is an artist, curator and arts organizer from Albuquerque, New Mexico. She received a BA in Studio Arts from the University of New Mexico in 2016. Her studio practice and public works are human focused and often engage with community.

​Atkins has created public murals, mosaics, and sculptures in Albuquerque, NM that honor everyday people.In  2021 she was a selected artist for the Lowe’s Home Improvement “100 Murals” national project.  She also collaborates with her partner Will Guesz on public works across the country. In 2021, they were artists in residence at the Kennedy Heights Arts Center in Cincinnati, Ohio. They are currently working on a series of mosaics for the Fort Logan Mental Health Institute in Denver Colorado. While working on collaborative projects, she is building a body of work that explores notions of gender, beauty and identity; this work has been shown in galleries locally and internationally in Berlin, Germany.

​Atkins is the Associate Director of Opportunity, and Lead Artist of the Arts & Social Justice Apprenticeship at the Harwood Art Center. She was a 2018 recipient of the inaugural Women in Creativity “Shine” Awards, which honors creative women and their community impact. Atkins co-founded  Plates Against Patriarchy, a visual arts and storytelling project that challenges patriarchal systems of power.  She is currently the Vice Chair of the Albuquerque Museum Board of Trustees, and the Treasurer of the governing board of 516 Arts.

​Much of Atkins’ work is informed by her cultural, and socio-economic roots. She is biracial, bicultural and comes from a working-middle class family. While building a dynamic career for herself, she is committed to nourishing the creative eco-system of her community. Thus, much of her work lies in organizing opportunities for her peers. 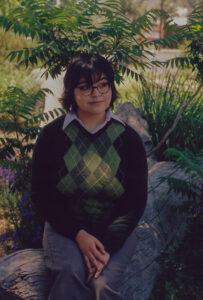 Born and raised in Albuquerque, NM, Riah Garcia-Ramirez is a passionate and determined individual with a dedication to serving their community. Over the years, Riah has developed skills in a variety of mediums such as digital photography, architectural design, clay and large scale sculptural production. As an environmentalist, their art focuses on the natural world and ecology; visually engaging with organic forms and natural processes. With Riah’s fine scope on nature’s creations, their intention is for others to find beauty in the unconventional. 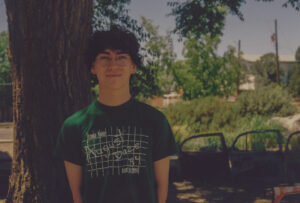 Gus Tafoya is a student, filmmaker, artist, writer and performer born and raised in Albuquerque, New Mexico. After graduating from the Media Arts Collaborative Charter School with a focus in film and the visual arts, they are now studying Film Production at the University Of New Mexico. In 2020 they were awarded second place UNM Hulsman Emerging Researcher for their paper concerning Folk Music and Language Poetry, and recently screened their poetry film Yucca Lust at the Santa Fe Independent Film Festival. As he continues to grow he plans on flexing the different mediums while promoting intimate, personal, and relationship based art that is accessible to all people. When they’re not busy with school or other projects, he likes to spend time with friends by cracking wise and enjoying a bite to eat. 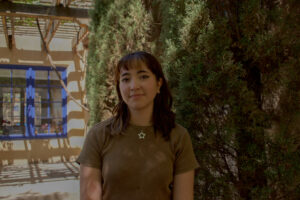 Arielle Roybal is an interdisciplinary artist born and raised in the heart of the desert, Albuquerque, New Mexico. She is inspired by her northern New Mexican heritage, often reflecting elements of the culture in her work. Arielle is an alum of Bosque School, where she led the student service learning group Women’s Advocacy Coalition for numerous years in addition to directing other diversity initiatives on campus. Leading Women’s Advocacy Coalition, Arielle fell in love with using art as a tool for social change. In the summer of 2021, Arielle was further introduced to public art by participating in the Mayor’s Creative Youth Corps, funded by the city of Albuquerque’s public art and culture department. Arielle is currently attending Washington University in St. Louis, and was a recipient of the prestigious Annika Rodriguez Merit Scholarship. There, she is studying architecture with a double minor in urban design and creative practices for social change. With architecture, she is committed to focusing on enacting  justice with a concentration on serving her community in New Mexico. 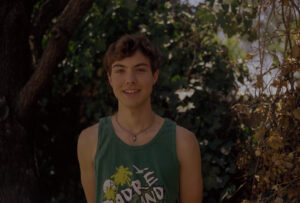 Quinn Erickson is an artist and art historian working between Providence, Rhode Island, and Albuquerque, New Mexico. Across disciplines, Quinn is interested in the passage of time through material and the persistence of history in everyday life. His practice is primarily 3-Dimensional, spanning multimedia sculpture, found object assemblage and installation. Often inspired by photographs and remnants of family heirlooms, he translates them into larger (some might say fossilized) touchstones into the past. While some are direct composites of these artifacts, others rely on a longer process of research and abstraction to produce an image. Ultimately, Quinn finds power and inspiration in honoring both personal+community histories, and believes in the importance of expanding this practice into public spaces.

In 2019, Quinn was a part of the mural collective awarded “Best Muralist” by the Austin Chronicle. Alongside this public arts practice, he has continued building a studio art portfolio. A YoungArts Merit Winner in 2020 with work exhibited in juried exhibitions, he recently had a solo exhibition at Brown University titled “Small Town Charms.” He can’t wait to continue this work as a first-year apprentice with Harwood Art Center’s Apprenticeship for Art & Social Justice. 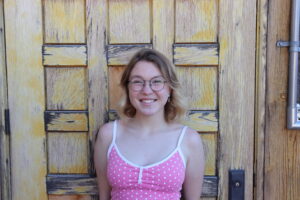 Lillie Estes is an Albuquerque artist and student. As a multimedia artist, she works with textile, natural dyes, water color, ceramics, and sculpture. Her work explores the interactions between bodies and space, integrating whimsy and playfulness with themes of ecology, identity, and interconnectedness. Lillie believes in the ability to use creative practice building meaningful connections that serve healing, community, and understanding. Community, sustainable food systems, and intentional living spaces are fundamental in her life, and she enjoys exploring these topics through cooperative living, and time spent living and working on organic farms.

She is continually inspired and moved by her role as a fifth year assistance artist for Harwood Art Center’s Apprenticeship for Art & Social Justice. Lillie works both in a creative and administrative capacity and is involved in the large scale metal fabrication portion of the sculpture and project management.  She is delighted to be back in collaboration with her team. 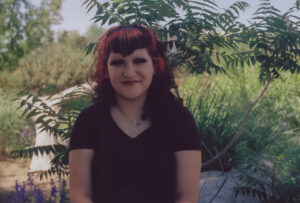 Isabela Ortega is a multidisciplinary artist from New Mexico. She is currently seasonally based in Albuquerque and Chicago, Illinois where she is a rising junior pursuing a Bachelor of Fine Arts with an Emphasis in Writing at the School of the Art Institute of Chicago. She is an alum of The Oxbow School’s 41st semester in Napa, California. She attended Highland High School, and was involved in many community organizations, in the International District – one of New Mexico’s most diverse communities. Isabela takes great pride in her “war zone” roots despite its adversity.  Her Chicana identity inspires her creativity, and she has been artistically and musically inclined since childhood.  Frequent trips to visit loved ones in Chihuahua, Mexico led to her profound appreciation for the borderlands and its complexities. In her practice she explores themes of social justice, death, and domesticity. Mundaniety witnessed through the lens of storytelling, symbolism, and deep reverence are at the heart of Isabela’s practice. 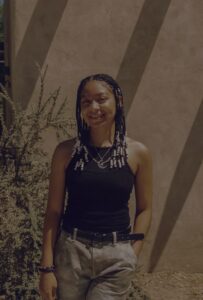 Natalie was born in Albuquerque NM where she has resided all 18 years of her life. She grew up surrounded by poverty, drug abuse and gang violence. To distract Natalie, her grandmother Elizabeth introduced her to arts and crafts at a young age. This created a way for her to cope and heal through painting, drawing, sculpting and crocheting. Over time she became more aware of her surroundings, witnessing inequality and injustice which sparked her interest in activism. With the influence of a family member, Natalie was then introduced to several justice advocacy programs; Black Lives Matter of NM, Millions for Prisoners, Mutual Aid & Save The Kids. Being a mixed raced Woman of Color, she understood the need for these organizations and knew her voice was essential in the fight for Social Justice.

As a second year apprentice, Natalie is thrilled to be back in collaboration with the team and the community of the International District. 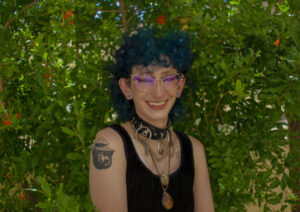 Born and raised in Albuquerque, New Mexico, Leviathan O’Neil’s body of work is informed by the New Mexican landscape around them, their queer identity, their spirituality, and their journey with mental health. They began their journey as an artist out of necessity, as they were born with a cleft palate due to a genetic disorder. Art, from a very young age, served as a baseline means of communication. His artistic focus in adulthood has shifted towards communicating a more complex inner dialogue. Having struggled for years with mental illness, specifically related to trauma, their art is a lifeline for themself and an olive branch for others facing similar battles. 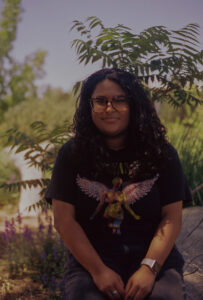 ​Marisol Vela is an artist from the Southwest, currently living in Albuquerque’s South
Valley, and attending Albuquerque High School. Growing up with the golden culture of the Southwest, many of her vibrant pieces have been inspired by the natural and botanic elements of the environment around her. She is a first-year apprentice, with a focus on social justice issues within the community. She has helped to contribute art for the Environmental Justice Library and Nature Store in the Visitor Center located at the Valle De Oro Wildlife Refuge. Additionally, she has been an intern for the Mayor’s Creative Youth Corps, who’s main initiative was sharing, creating, and spreading awareness about local art in the community. As a first-year apprentice, she will be working alongside other fellow apprentices and lead apprentices on adding to the installations at Mesa Verde Park. This summer, the main focus is creating clay tiles for an installation. With a background of using mediums consisting mostly of colored pencil and alcohol markers, working with clay this summer will be a change of scenery for her. 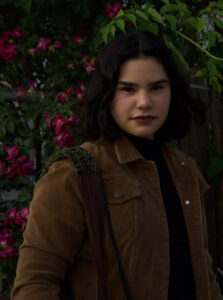 Andrea Selfridge is a passionate artist and activist from Albuquerque, NM who maintains a consistent presence within community service. Andrea grew up in Barelas and the South Valley and is appreciative of her roots in these communities and the present Chicano culture. She is a graduate from South Valley Academy’s class of 2021. She is also a recipient of the prestigious Daniels Fund Scholarship and the New Mexico Simon Scholarship. Andrea currently attends the University of New Mexico studying Chicana/o Studies and Psychology. She hopes to someday serve Albuquerque as a culturally inclusive mental health provider. Andrea is a multimedia artist who explores with mediums such as watercolor painting, acrylic painting, pen drawing, and both film and digital photography. Andrea’s photography was included in Working Classroom’s YOUth Matter group exhibition. This project was the emergence of her primary focus on documenting creative individuals within Albuquerque’s art/music scene through film photography.